Here at the Insider, the staff loves beer. With craft beers on the rise, there have never been more brews to choose. That’s why we have decided to sort through the suds and give some suggestions for the next time you go to grab a cold one.

The objective: patron a local bar and sample two beers. We let our taste buds duke it out and decide a winner. 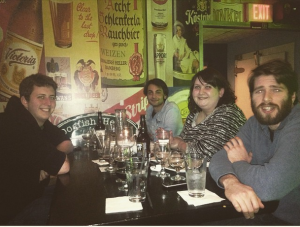 This week, the staff went to The Headkeeper in Greensburg. Our first fight was to find the sour of the hour: Liefmans Goudenband versus Liefmans Cuvée-Brut. According to Liefmans’ website, their Goudenbrand is a dark beer with 8% ABV and “aromas of caramel, apple, rhubarb, cherries, and malt.” The dark, nearly purple beer gave off a jam-like, vinegary aroma. Upon tasting, Editor-in-Chief Kyle Holland said, “I understand why it’s called ‘sour;’ the flavor is tart and dry, and it drinks similar to a champagne.”

The next drink put to the test was Liemans Cuvée-Brut. Liefmans described this 6% ABV beer on their website as having “slightly sweet, yet . . . gently bitter fruit flavors.” We found this drink to taste like someone poured too much cherry cough syrup into the Goudenband. Copy Editor Luke McDermott tasted Luden’s Wild Cherry Throat Drops, while Layout and Design Editor Michelle Boring found notes of cat piss and battery acid.

Between the two, the Liefmans Goudenband sits atop the summit of the sour beer taste test. This smooth and dry drink is a great start for those looking to exploring sour beers.

Round two was a bout of the stouts: Lagunitas Cappuccino Stout against Coronado Brewing Co. Stupid Stout. The 9.2% ABV Lagunitas Cappuccino Stout has a strong mocha aroma and a dark, creamy head. I like the fresh-ground coffee taste, but I was disappointed not to find a creamier cappuccino flavor. The drink was bitter, strong, and a perfect pick for those looking for a late night buzz.

The 9% ABV Coronado Stupid Stout was a milder affair. Copy Editor Shannon Sankey liked the bitter but smooth beverage. McDermott described the drink as having sweet earthen scents and a creamy, almost thin and bitter aftertaste.

These seasonal stouts proved to be a tight match, but the winner was the Coronado Stupid Stout. Overall, the milder drink was a smoother and more enjoyable take on coffee-infused brews.

For more about Rob Spadafore and what he thinks is fun, visit his blog here