“Nioh” is often referred to as a souls-like, which means that the gameplay relates to the game Dark Souls, which set the trend for brutal difficulty throughout gameplay with one mistake often leading to death and a journey back to the previous shrine.

“Nioh 2” is an action RPG that takes place during the Sengoku era of Japanese history, which lasted from the Onin War in 1467 to the unification of Japan in 1598.  The story of the game is heavily based upon the wars leading up to the unification of Japan but also includes the presence of Yokai, which are supernatural creatures in Japanese Mythology.

The enemies you fight in your journey are either the soldiers varying in strength or different kinds of Yokai that stand in your way.  Bosses in the game range from human bosses to larger sized Yokai.

The name of the game in “Nioh’s” combat system is managing your health with limited healing items and the management of your stamina, also known as ki.  Management of your ki is as important as your health as if you get hit without ki, the enemy is allowed to get a grapple on you dealing massive and usually fatal damage to you.  The mechanic also extends to your foes as well.

“Nioh 2” gives the player the ki pulse mechanic that allows the player to regenerate ki after attacking with a well-timed press of R1 and also leads to temporary buffs with perfectly timed ki pulses.  A ki pulse also dispels patches of areas that slow down your ki regeneration.

“Nioh 2’s” strength in gameplay is the variety, and a vast amount of options the player has in combating the threat that impedes progress. The player can choose between seven different weapons, which include the sword, odachi, kusarigama, spear, ax, twin hatchets, and switch glaive.  Each weapon has a deep move set that you unlock skill points for overtime as you use the weapon type you use, and you later do dojo missions to unlock further abilities that you can put skill points into each skill tree.

The game also gives the player the choice to use Omoyo magic, which ranges from buffs to the player, debuffs to the enemies, and projectile elemental damage and ninjutsu that gives the players tools that can be used in battle along with being refreshed after they rest at a shrine.

The allocation of stat points that you get overtime from collecting amrita and praying at shrines is critical through having the stat points necessary to use the passive buffs from guardian spirits that you collect along the journey.  The guardian spirits also have skills that add an attack from the use of a fleeting guardian amulet, but I find them not very useful most of the time.

“Nioh 2” also changes up the formula of the game through getting rid of the living weapon mechanic for the yokai form, which falls under the three categories Brute, Feral, and Phantom, which is based on the guardian spirit you used.  The main difference between the brute, feral, and phantom forms is the new burst counter parry mechanic that lets you interrupt a strong attack of an enemy dealing damage and ki damage to an enemy.  Each form has different moments of deflection where the brute you have to anticipate the attack beforehand but usually outright end the attack, the feral you dash into it right when the attack is about to go off, and the phantom that acts like a shield, where you use the burst counter as soon as the attacks hit.   Enemy attacks that can be burst countered glow red, letting you know that the burst counter can be used here.

The new burst mechanic feature adds a lot more depth to yokai encounters than “Nioh” had because enemies do not just stagger after you hit a weak point, and you get a free grapple attack for massive damage. The game also adds this mechanic to boss battles, which make the boss fights feel more interactive intense as you can create openings for you to get hits in through a well-timed burst encounter.

The game also adds the dark realm into the mix where the game slows down ki regeneration and makes enemies stronger with different attacks in boss realms and the area.

In common areas, the dark realm can be dispelled through fighting the head honcho yokai in the area and rewards the player with a treasure chest or shrine that you can rest at to replenish your healing items, ninjutsu, and Omoyo Magic.  The dark realm also appears in boss fights where the boss will change up its attack patterns, and the player is given the choice of trying to drain the boss’s ki bar so that they can get free damage in or wait it out.

The game is very loot-focused, as there are four types of rarity that range from standard, uncommon, rare, and exotic throughout the game with various qualities.  The game also includes a forge that you can disassemble weapons and armor. You do want to create items you do want.  One downside to the forge is getting the quality of the item you want even if you use the highest quality materials; there is still an rng chance not to get the quality you want, which is frustrating since gear is critical for success.

The forge also allows you to soul match gear to allow them to level up to the level of the item your soul matched it with to improve the weapon or armor.

Overall, I found Nioh 2 to be a worthy successor that builds upon its’ that is more fun and engaging in battles against the normal yokai and bosses.  The new additions of the switch glaive and twin hatchets are fun weapons to use and master while you play the game.  I also found the shift toward the yokai form to be more fun and the abilities that come with it. 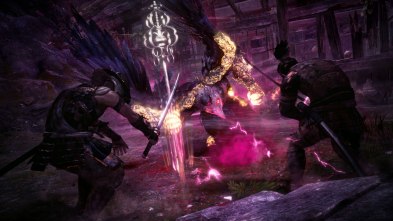 The emphasis on the rarity of loot is frustrating at times, and I ran into issues with Burst Counters, but I had little to gripe about over the course of my playthrough.  The Kodama Bazaar fixed a lot of the annoyance of running low on healing items and allows you to keep challenging bosses without having to grind enemies.

“” does a great job of introducing the mechanics during, and it feels sati

sfying to master the mechanics over time as you continue the game.  The game gives players a lot of variety in how they tackle the game’s challenges, and its fun to try out new strategies.  There is a lot of content in the game, and it’s worth every dollar of the sixty-dollar price tag if you do not get frustrated easily.

If you liked “Nioh,” you would love its sequel, and it’s a great addition to the Action RPG genre with a deep combat system that keeps you coming back for more. DLC will be added later.

For a score on the game from me, I would give it a 9.5/10 for helping me get through a hard time with the COVID-19 pandemic, and I highly recommend the game to anyone who likes the Action RPG genre.