On April 5, the Pitt-Greensburg Bobcats Division III ice hockey team defeated the University of California – San Diego to bring home the 2014 College Ice Hockey Association (CIHA) National Championship for the first time in team history. The Founder’s Cup National Playoffs were held April 3, 4 and 5 at Lou & Gib Reese Ice Arena in Newark, OH. Pitt-Greensburg defeated Union College, by a score of 9 – 3, and Xavier University, by a score of 7-5, to advance to the final round. 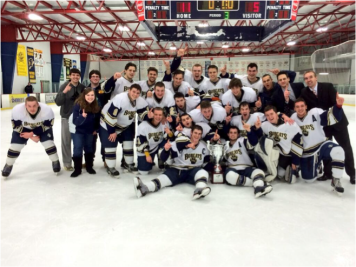 The Bobcats punched their ticket to the national championship by defeating Carnegie Mellon University and the Community College of Allegheny County for the 2014 College Hockey East CIHA League Cup on February 22 and 23.

The Bobcats will start their next run for a national title on September 21, when they take on Edinboro University of Pennsylvania at Erie Insurance Arena.

Christy Walters is a writer and the Assistant Editor for The Insider.