Photo by David J. Phillip for the AP.

Two weeks ago on Feb. 7, Tom Brady and the Tampa Bay Buccaneers were victorious against the Kansas City Chiefs in Super Bowl LV. The Buccaneers defeated the Chiefs 31-9 on their home field of Raymond James Stadium.

A few days later on Feb. 10, The Tampa Bay Buccaneers held a celebration parade to honor their championship victory.

However, due to the many changes the COVID-19 pandemic has caused, the celebration was held on the Hillsborough River in Tampa for a boat parade.

Yes, that’s right, all the players and coaches from the Tampa Bay Buccaneers celebrated their Super Bowl win on various boats on the Hillsborough River.

Fans were in attendance to watch the boat parade from afar.

Although the celebration was one for the ages, there came bad news following the event. 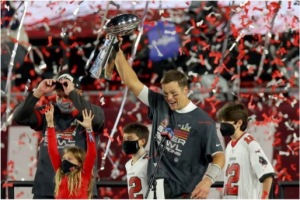 This comes as no surprise because of the lack of social distancing and mask wearing following the Super Bowl victory.

Players and coaches were seen without masks and not socially distant during the trophy presentation ceremony.

According to Thomas Mates, a producer and writer for ClickOrlando.com, some of the 25,000 fans at the game were seen crowded into lower-level bleachers without masks to get a better glimpse of the trophy presentation.

In addition, there were fans gathered outside of the stadium crowded together and maskless.

Despite Tampa Mayor Jane Castor issuing an executive order last month requiring masks to be worn outside in the days following the event, many refused to listen.

Now, Florida has 5,640 new COVID-19 cases, despite the effort by the city of Tampa to curb the potential spread of the virus. Experts warned the Super Bowl could become a super spreader event.

Unfortunately, this was all before the Super Bowl parade that was held a few days later on the Hillsborough River.

“Despite efforts from the city and police to remind people and businesses to mask up, much of the crowd decided not to wear face coverings,” Marco Villarreal said to Tampa News Channel 8.

In addition, Dr. Jay Wolfson with USF Health told Tampa news channel 8, “given the large number of people and the tremendous congestion, it’s likely that we’ll see how similar increase in weeks and the percentage is probably going to pop up again.”

Given this information, it’s likely that in addition to the spike in COVID-19 cases following the Super Bowl, there will be more new cases due to the Super Bowl parade.

Even though the Super Bowl victory was super for the Tampa Bay Buccaneers, their fanbase, and the city of Tampa, the event of the super spreader far superseded any trophy.

Public health experts fear that new, more contagious variants will soon become dominant in the U.S. due to the spread of COVID-19 as well. The first one was identified in the U.K. and is known as B.1.1.7.

At least 187 new cases of the B.1.1.7 variant have been detected in Florida, according to the CDC.

Since the new variant was already present in Florida before the Super Bowl, it is likely that it was spread during the Super Bowl.