Feb. 14, a day full of love, chocolate, and valentines. But this year at the Capitol Wrestling Center, fists flew, suplexes shook the ring, and drama defined the future. “NXT Takeover: Vengeance Day” changed the landscape of WWE’s third brand for the near future.

The show started out with the finals of the first ever “Women’s Dusty Rhodes Tag Team Classic.” Dakota Kai and Raquel González faced Shotzi Blackheart and Ember Moon in an attempt to make history as the first women winners of the Dusty Cup. The end result had Kai and González double covering Blackheart for the 1-2-3. This gives the two women a chance to face the Women’s Tag Team Champions, currently Nia Jax and Shayna Baszler, in the future. 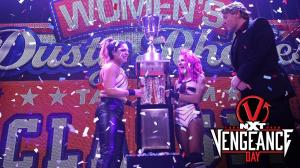 The clash that followed had Johnny Gargano, the current NXT North American Champion, defending his title against Kushida. This 25-minute instant classic showed the dominance of Kushida, while still having Gargano retain the belt.

The third match of the night had Wes Lee and Nash Carter of MSK face James Drake and Zack Gibson of The Grizzled Young Veterans in the finals of the “Men’s Dusty Rhodes Tag Team Classic.” The result of the match has MSK, the newcomers, defeat the ‘veterans,’ of NXT, the Grizzled Young Veterans. This allows MSK to face the current NXT Tag Team Champions, Oney Lorcan and Danny Burch, for the championships in the future.

The final women’s match of the evening followed, which had Io Shirai defending her NXT Women’s Championship in a triple threat match against Mercedes Martinez and Toni Storm. The clash did moonsaults off of massive posts, triple submissions, and so much more. In the end, Shirai hit a moonsault onto both women and pinned Martinez to retain her championship.

The main event of the evening had Finn Balor defending his NXT Championship against Pete Dunne. The match took more of a technical wrestling angle; full of submission attempts, joint manipulation, and snapping fingers. The match lasted 25 minutes and had drama until the very last second. Balor hit his combination of moves, the 1916 DDT followed by the Coup de Grace, to pin Dunne and retain his title. 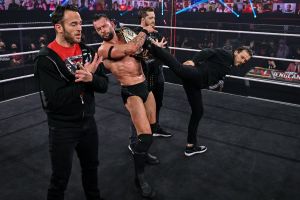 After the match, Dunne’s partners, Oney Lorcan and Danny Burch, attacked Balor out of anger. Balor’s friends, the Undisputed Era, consisting of Kyle O’Reilly, Roderick Strong, and Adam Cole, came to his rescue. The three stormed the ring, beat up Dunne, Lorcan, and Burch, and helped Balor to his feet.

The Undisputed Era then stood in their regular formation and did their hand symbol. However, once Balor looked to join them, Cole turned and super kicked him in the face. This caused O’Reilly, the better friend Balor, to get angry and push Cole out of confusion. Strong stood shocked, and tried to get answers out of Cole while O’Reilly tended to Balor. Cole then turned and super kicked O’Reilly in the face, and left him laid out, with Strong looking on. 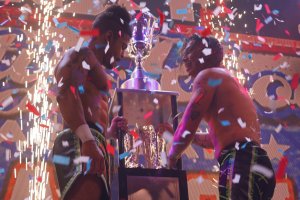 This Takeover reminded fans of the Takeovers before the COVID-19 pandemic started. The matches were full of action and drama, and none of them really dragged on. The only disappointment fans had was the women’s triple threat match, which they believed was too short. The drama at the end left the WWE Universe heartbroken, and wanting more.

The end of the Undisputed Era will go down in WWE’s history as one of the most shocking moments of the pandemic era. This Takeover is definitely worth the watch, if you’re looking for hard hitting matches all around.