On Feb. 13, former President Donald Trump was acquitted by the Senate for the second time. The senate voted 57-43 in favor of conviction, but a two-thirds majority, or 67 votes, is required for conviction.

Trump was impeached by the House of Representatives on Jan. 13 and charged with incitement of insurrection.

In a press release, Sen. Toomey said, “as a result of President Trump’s actions, for the first time in American history, the transfer of presidential power was not peaceful” and Trump’s “betrayal of the Constitution and his oath of office required conviction.” 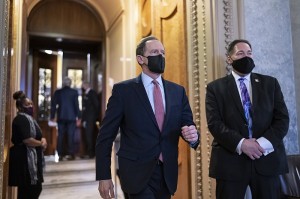 Photo of Sen. Toomey via the AP.

Although Trump was out of office by the time the trial began, the Senate voted 56-44 to continue the proceedings. Ultimately, the Senate determined the case was still within its jurisdiction because he was impeached while in office, and thus starting the trial was not unconstitutional.

Throughout the trial, the impeachment managers argued Trump had advance knowledge of the Jan. 6 attack on the Capitol building and purposefully encouraged violence against legislators who planned to certify the results of the 2020 presidential election.

“You will see, during this trial, a man who praised and encouraged and cultivated violence,” Rep. Raskin said in his opening statement. “He told them to ‘fight like hell,’ and they brought us hell on that day. Incited by President Trump, his mob attacked the Capitol.”

During their arguments, impeachment managers presented video footage, audio recordings, Twitter screenshots, and photographs to display the brutality of the riots and connect former President Trump to the escalation of violence.

Among the footage from Jan. 6 was one clip in which seemingly hundreds of rioters are pushing against a line of police officers in an attempt to breach the west side of the building.

The video shows D.C. Metropolitan Police Officer Daniel Hodges pinned against a metal doorway by a rioter’s shield, crying and screaming “help” as blood flows from his mouth. He later suffered from broken ribs and a concussion. (The footage is available here from the New York Post; please be warned that it is extremely graphic.)

“Officer Hodges’s experience reminds you of what he and many other officers experienced that day,” Rep. Swalwell said during his opening statement. “May we do all we can in this chamber to make sure that never happens again.”

Five people died at the Capitol on Jan. 6, including one police officer, Brian Sicknick. At least 138 other officers were injured in the riots, and 15 of them needed to be hospitalized. Capitol Police Officers Howard Liebengood and Jeffrey Smith also committed suicide shortly after the riot.

During her speech on the second day of proceedings, Delegate Plaskett said, “extremists reportedly coordinated online and discussed how they could hunt down the Vice President. Journalists in the Capitol reported they heard rioters say they were looking for Pence in order to execute him.”

Photo of Delegate Plaskett via The New York Times.

At one point, there was a group of rioters only 100 feet away from where Pence and his family were hiding.

“The mob was looking for Vice President Pence because of his patriotism,” Delegate Plaskett said, “because the Vice President had refused to do what the President demand and overturn the election results.”

Trump’s lawyers disputed the impeachment manager’s claims and argued that the trial was altogether unconstitutional, despite the Senate voting that the proceedings were constitutional.

In his opening statement on Feb. 12, van der Veen called the article of impeachment filed against Trump “constitutional cancel culture” and “a preposterous and monstrous lie.”

“The fact that the attacks were apparently premeditated, as alleged by the House managers, demonstrates the ludicrousness of the incitement allegation against the President,” van der Veen said on day four of the proceedings. “You can’t incite what was already going to happen.”

Additionally, they played a video montage of Democrats using phrases like “fight” and “fight like hell,” arguing that their language was no different from Trump’s Jan. 6 speech the House managers claimed escalated the rioting.

Photo of van der Veen via the New York Post.

Photo of van der Veen and Castor via Reuters.

After opening statements were finished, senators were able to submit questions to either side. The Senate then held a four-hour question and answer session to respond to senators’ submissions. (Every question that was asked and its answer can be found in the Congressional Record for Feb. 12.)

The House managers initially decided not to call witnesses after Trump declined to testify in front of the Senate. Later, the House managers reversed their decision and attempted to summon Rep. Jaime Herrera Beutler (R-Wash.) to testify about a phone call.

Rep. Herrera Beutler told the House managers that House Minority Leader Kevin McCarthy (R-Calif.) told her about a phone call he had with Trump. Allegedly, he told Rep. Herrera Beutler that Trump insisted the rioters were members of “Antifa,” and when Minority Leader McCarthy refuted Trump’s claim, Trump said, “well, Kevin, I guess these people are more upset about the election than you are.”

After negotiating with Trump’s defense team to add Rep. Herrera Beutler’s testimony to the trial record, the House managers decided to retract their request to call witnesses, and each side presented closing arguments.

Trump is the first president in U.S. history to be impeached twice. Although there were not enough votes to convict him, the verdict was the most bipartisan impeachment verdict in history as well.