In honor of Breast Cancer Awareness month, The Diversity Student Coalition (DSC) put on their annual basketball tournament fundraiser, Hoops for Boobs, on Thursday, Oct. 12 in the gymnasium from 7:00 p.m. – 10:00 p.m.

“This was my third year being a part of the event, but second year actually being a part of it and taking a lead on it,” said Mickey Hartman, senior accounting major with a statistics minor and President of DSC.

DSC had seven teams consisting of seven players ($5/player) that participated in a one day basketball tournament.

“The games were shorter leading up to the championship game, which meant more action was occurring as more games were packed into a smaller time frame,” said Troy Ross, Director of Housing and Residence Life and advisor of DSC.

The Pitt-Greensburg men’s basketball team refereed the tournament, who each received a $10 Walmart gift card.

As far as entertainment, DSC had the Pitt-Greensburg dance team perform during halftime, in addition to their keynote speaker, Kathy Brown, a representative from the PA Breast Cancer Coalition. 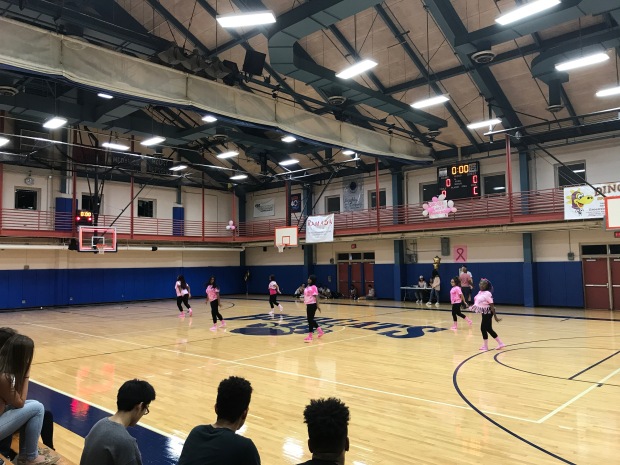 Additionally, DSC added a new asset into their event which was the free throw challenge to increase the funds raised.

“This was a fun way to raise money this year, and ended up being a pretty significant fundraiser for us,” said Ross.

There were also three raffle baskets (movie basket, a Starbucks basket, and a Steeler ticket basket) that the campus community could buy tickets for before the event and during the event all the way up to half-time.

The Resident Student Council (RSC) also had a Breast Cancer fundraising event the same night in correlation to Hoops for Boobs, called “Pizza, Pucks, and Pie Oh My!”

“If people wanted to get up and walk around, they could just go over to Chambers and get food from RSC,” said Hartman.

DSC and RSC both raised a total of $753.67 to be sent to the PA Breast Cancer Coalition.

“It’s trending upwards, and I would like to see that continue, so that in the years to come that we are raising more and more money,” said Ross. “The goal is to support the fight against breast cancer.”

Each member of the winning team, “The D3’s,” received $10 Chick-fil-A gift cards.

“I think it’s a great event because it gets students involved in a way that they feel comfortable getting involved,” said Ross. “For them it is just coming to play basketball, but it’s much more than that. It’s raising awareness, it’s raising money, it’s doing all these things in support of the PA Breast Cancer Coalition.”