Despite adversity, Pitt-Greensburg’s soccer teams found their own successes in 2015.

Men’s head coach Dan Keefe said the team’s season was not defined by its record, beginning the season at 1-6-1 and finishing 3-6-0 in the ACC Conference.

“Toward the end, the ship was righted,” Keefe said. “There’s a lot of hope for next season. Freshman Alex Fell never sat a minute. We have a young team who matured years this season.”

Coming into the 2014-15 season, the men’s team lost 14 seniors, and will lose three more seniors–Brandon Soellner, Jerome Williams, and Trevor Smith–next year. Keefe said that despite these losses, he was proud of his team’s growth. Eight of team’s 12 losses were by two goals or less. 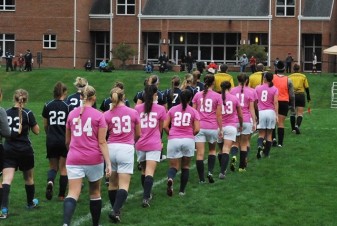 “We have three seniors leaving the program this year and they wanted to leave their stamp on the team,” Wigle said. “The freshmen class also had a big impact. We had at least four freshmen starting each game.”

Highlights of the season for Wigle included being named, and winning, the AMCC Game of the Week three times; beating the number 1, 2 and 5 seeded teams, and beating rival Pitt-Bradford by a score of 6-1 in the last game of the season.

Both Keefe and Wigle encourage people to get out and support their school sports teams.

“Student athletes deserve support and recognition for their hard work in and out of the classroom,” Keefe said. “You may see that guy who’s in your one class out on the field and that’s pretty cool.”