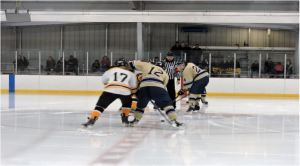 In their first game of the new year, the Pitt-Greensburg Bobcats hosted the College of Wooster on January 16, 2015.

Confident in their abilities, especially after the addition of freshman forward Mike Klena for the semester, the Bobcats expected a big win on this night. Noticing Klena’s ability during the practices leading up to this game, forward Dante Youhon said that “Mike is a great addition. He’s really going to help on special teams and upfront.”

The first period did not start off as planned, however, as Wooster scored a goal less than a minute into the game on starting net minder Thomas Clark.

Pitt-Greensburg’s newest player, Mike Klena, would soon answer with his very first goal as Bobcat, assisted by Nico Vecchio and Anthony Maroadi, to tie the game at 1-1. Maroadi answered with a goal of his own 29 seconds later, assisted by Vecchio and Clark with his first assist of his collegiate career.

Despite being down, Wooster didn’t give up as they quickly answered with a goal of their own. This goal would virtually end the back-and-forth play, Wooster had a few less players than the Bobcats, and their short bench seemed to catch up with them as the period went on. According to Youhon, “we started out really slow in the first period, but then we woke up and actually started to play.”

Capitalizing on the worn down players of Wooster, Dan Merz scored his first goal of the night, assisted by Youhon and DJ Petrovey to put the Bobcats up by a score of 3-2. Maroadi answered with his second goal just one minute later, assisted by Klena and Luc Tilley.

After this flurry of three quick goals, all coming within one minute of game time of each other, the period went out quickly besides a five-minute major for crosschecking by the home team.

At the end of the first, Pitt-Greensburg lead Wooster by a score of 7-2. The Bobcats lead in shots, 19-7.

Hoping to make a miraculous comeback, Wooster opened the second period by capitalizing on the five minute major to decrease the Bobcats’ lead, 7-3. Shattering Wooster’s comeback hopes, Maroadi scored his hat-trick goal, with assists from Vecchio and Billy Dixon, to put the Bobcats up by five goals once again.

Before the second period could end, Maroadi scored a fourth goal, assisted by Klena and Vecchio, followed by Vecchio’s first goal of the night, assisted by Maroadi and Klena, to increase their lead to 10-3. If the first period’s play was not enough to convince one of Klena’s impact on the top line, assisting on each goal in the period should have done the job.

At the end of the second, shots on goal were 33-11 in favor of the Bobcats.

Essentially going with the idea that anything can happen in hockey, the Bobcats never slowed down their game. Their dominance continued with Vecchio’s second goal of the night, assisted by Klena and Maroadi once more.

After a relatively calm ten minutes of play, Youhon would score his second of the night, assisted by Merz and Tilley. Not stopping there, Youhon joined his other teammates with a hat-trick with his third goal, assisted by Petrovey and Merz, to put the Bobcats up by a score of 13-3.

One minute later, newcomer Mike Klena scored his second goal of the night, assisted by Maroadi and Vecchio, to bring his first-game-point total to 6 on the night.

After scoring 17 goals compared to their opponents’ 3, Pitt-Greensburg came out on top of what appeared to be a scary matchup in the opening minutes. With the victory, the Bobcats improved their record to 14-2 on the season.

By scoring 153 goals this season compared to their opponents 61, the Bobcats are not exactly used to having close games every night, but this game proved to be exactly that.

Veteran goaltender Ryan Palonis would get the nod in this one. The goal scoring would go back and forth throughout the night with two goals from Captain Nico Vecchio, and one goal from one of the alternate captains, Anthony Maroadi.

The play was so even, in fact, that the game went all the way to a shootout where the Bobcats won with goals from Maroadi and Merz. Palonis saved 37 of 40 shots, and he did not allow a shot to go by him during the shootout.

Unfortunately, Pitt-Greensburg’s league, NCHA, does not recognize shootouts, so the game officially ended in a tie. At the very least, the Bobcats can count it as a moral victory.

Next weekend, on January 23, the Bobcats will face off against the University of Delaware.

The following night, January 24, Pitt-Greensburg will play Washington and Jefferson College, where all students will receive free admission as well as a free skate with the tea, after the game is over. Skate rentals will be free for Pitt-Greensburg students.