Gearbox’s “Borderlands: The Pre-Sequel” may feel stale to returning fans, though newcomers will have plenty to enjoy if they’re willing to ignore plot entirely. For better or worse, the game is a culmination of Borderlands 1 and 2’s gameplay and narrative direction. Technically the third installment in the Borderlands series, the title chronologically takes place between the previous two titles.

The role of the player in a Borderlands game is typically a gun-toting, intergalactic outlaw in search of treasure on the desert planet Pandora. The planet is littered with ancient alien technology—some usable in your arsenal, others serving as major plot devices—worth a fortune to the right buyer.  The catch is that Pandora is also host to various forms of Lovecraftian fauna, mask wearing “psycho bandits,” and private military companies of questionable moral compass.

Rest assured, the world of Borderlands is rife with solutions to these obstacles in the forms of its many, many guns. With a randomizing formula that generates guns of various forms, reload speeds, elemental properties and other such qualities, there’s a great deal of the enjoyment in the myriad of tools available. The original title in the series, Borderlands, held the Guinness World Record for most guns in a videogame at a count of 17.75 million. Each of the two continuations have added their own variables to the formula which ensures that the number has only grown since then.

Aside from the game taking place on Pandora, all of this remains intact for Borderlands: the Pre-Sequel. Instead, the stage for your adventure is its moon, Elpis. The terrain matches that of our own moon, and so scarce air and long leaps abound. 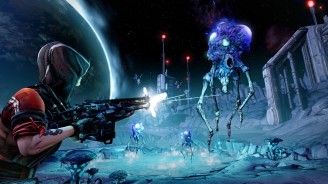 Returning to B:tPS is its cel-shaded art style. Distinct from its contemporaries, the choice in style reinforces the cartoony atmosphere that the series is known for. The decision ensures all acts of hyper violence are treated with comedic effect. It pulls the game in a direction which emphasizes fun instead of gritty realism, which is refreshing considering the current climate of first person shooters.

Absent in this iteration, however, is the variance in environments and textures that previous titles utilized to keep the pace fresh. As one would expect from a lunar environment, much of the scenery amounts to craggy mountains dyed in blues and cyans without healthy moderation to keep locations distinct from one another. As a result, travelling from one location to another can quickly grow monotonous.

To their credit, Gearbox utilized their new setting for a few astonishing views of Pandora from afar. For fans, this is a new way of looking at past experiences. For newcomers, it’s at least very pretty. 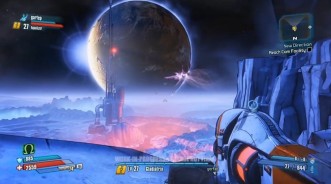 On the topic of sound, there’s little to say; mostly because there isn’t a whole lot of it. Unlike previous iterations’ twangy, western strums, B:tPS has elected to restrict background music to synthesizer tunes and simple beats. Likely, this was done to keep in theme with the lunar setting.

From a design perspective, it’s understandable to seek symmetry between multiple facets of the work. That said, although the visuals and soundtrack desperately suggest it, at no point is a feeling of vacuous isolation conveyed. This is likely due to every other statement a character makes being a joke of some form. There’s no time spent to build ambience and so what might’ve been an attempt at survival-inspired tension a la Gravity is ungraceful to say the least.

The gameplay for B:tPS is standard FPS fare. Though the game distinguishes itself from competitors in the countless amounts of guns, few new elements have been added to the mix. Of note is the new freezing effect which stops enemy cold, but for those returning there’ll be little else that you haven’t seen in the way of weapon builds. 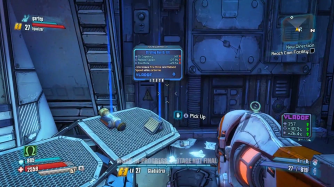 The greatest changes to the formula have everything to do with the game’s new setting and the introduction of a new type of equipment called an “O2 kit”. An air tank that provides both life-giving oxygen and jet propulsion, this inclusion is among the most conflicting changes to gameplay.

Each kit carries perks in the way of stat boosts and added effect while airborn or on ground pound: an ability that allows the character to shoot downwards and create a shockwave on landing. The benefit of these effects in comparison to the changes they create for gameplay is arguable, though it must be said that their inclusion creates a new dimension for combat. Prolonged air time and the option to quickly cancel jumps means there’s more to consider while considering your plan of attack.

On the topic of propulsion, the O2 kit allows for a double-jump at the cost of oxygen. The result is increased emphasis on vertically oriented platforming. This wouldn’t be a problem if the environments had been built to match, but the open maps are littered with bottomless pits and molten lakes so that vehicle-bound travel has to be performed at a snail’s pace to avoid oblivion.

As a survival device, the function of the O2 kit is to allow the player not to die. Being that Elpis has no breathable atmosphere, the air tank gradually depletes over time. Once your tank runs out, you die. Adding in the fact that the kit is used as a resource for your double jump, you’ll constantly be running for refills in order to continue playing. Enemies also drop air tanks on death, but this translates to funneling gameplay into combat as exploration is punishable by comparison. 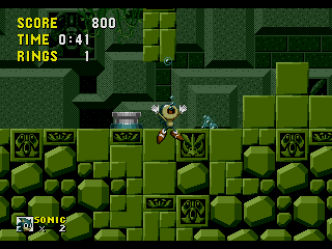 The experience is reminiscent of old Sonic the Hedgehog games which had a similar mechanic. When underwater, there is a 15 second timer put on Sonic so that he has to seek out air bubbles or return to the surface in order to live. As time runs out, an alarm will sound signaling impending asphyxiation. Imagine playing an entire game with that mechanic in place. I leave you to make your own judgment.

The single-player campaign itself is of adequate length, but questionably so at a retail tag of $59.99. There is an oncoming stream of DLC, though also questionable given the proximity of its release with the game itself.

The missions consist of 1.) go to an enemy camp and eliminate all enemies, 2.) platform your way to finding ‘X’ amount of story-progression items, and 3.) a combination of the above. This isn’t necessarily a flaw given the variety of ways to fulfill missions, but considering this has been the norm for two iterations, asking for innovation isn’t out of the question. 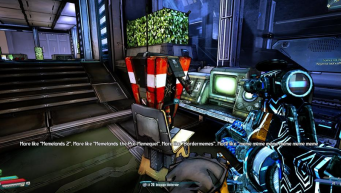 Worth addressing for its unmistakable presence in the story is the game’s writing in terms of dialogue and humor. The Borderlands series is known for its constant stream of jokes. However, with each sequel there’s been a mounting tendency of using internet culture to achieve this. For example, one of the first missions players must fulfill involves them posting image macros of cats all over a bandit camp.

Depending on your stance on this type of writing, this could be a non-issue. For its referential nature, it must be stated that none of these “jokes” have any foundation. There is no irony, absurdity, or cleverness to be found in these internet meme references, just a sense of shared knowledge in the here and now. The jokes age like milk. To understand what listening to this dialogue some years from now might feel like, question if you still find rick roll, chocolate rain, or arrow-to-the-knee jokes funny.

It’s difficult to condemn Borderlands: the Pre-Sequel. For its grievances, it manages to fulfill its duties as an installation in the Borderlands series. Length aside, the campaign is a solid co-op experience to be had between two to four people. The variation in guns differs little from past titles, but considering how much of them have been around for so long, it’s impossible to say that you’ll find exactly the same guns during any given playthrough. Missions also have little variance, but they’ve only ever existed to give the player an excuse to try out their favorite weapons on an assortment of foes.

Does Borderlands: the Pre-Sequel have value? Sure, on sale or for rent.