Pitt-Greensburg Tennis has a 3-2 record as it resumes its season this semester after the start in the Fall. 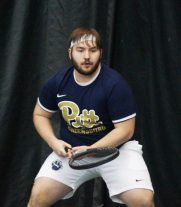 The Men’s Tennis team held a 3-1 record against opponents in conference play and lost only to Penn State Behrend in those games.

The boys have begun practice to continue their strong first half of the season and make the playoffs.

Vaughn Hunkele, one of the seven members of the team, has played tennis for seven years.

“There are six single matches, and then there are three doubles matches,” Hunkele said. “So every win counts when competing.”

The boy’s tennis team practices at the Greensburg Racquet Club on Tuesdays and Thursdays to prepare for their upcoming matches.  The team practices for singles and doubles during their biweekly practices.

“We do a couple laps around the courts, practice serving, and do strength exercises,” Hunkele said. “Then we play each other, sort of like sparring.” Hunkele said. “Our attitude is 100 percent about winning during practice while having a little fun here and there.”

Hunkele also talks about some of the tough games ahead.

“The game against Medaille College is one of our conference games,” he said. “It’s one of the dates that we will be circling on our calendars, and if we win that game, we are going to be going into the playoffs.”