Young people have a place to go in Greensburg.

“It’s a small price to pay for self-actualization,” Medley said in an interview.

While Medley talked shop, he sipped a cup of coffee and played Radiohead. Kentucky-born with a bachelor’s in Philosophy and a master’s in Library Science, he came to Greensburg for its “very underserved population.”

“We provide a study space, a hangout space, as well as a grab-and-go coffee experience,” he said of White Rabbit.

Rabbit Hole Records offers a different sort of space. Formerly the basement storage room for the cafe, it now houses ten thousand records at any given time.

“I’m a stereotypical hipster coffee snob,” he said. “So what’s any good hipster into, aside from coffee and snobbery and film? Records.”

Medley said his personal collection amounts to 600 records. When he and Kunselman opened Rabbit Hole last November, it was the only record store in a 30-mile radius.

When asked if he had a favorite record in the store, Medley didn’t hesitate.

He said his favorite drink from the cafe is the Ethiopia Glojo on a V60 pourover, and that their oatmeal raisin cookies are “the best things ever.” 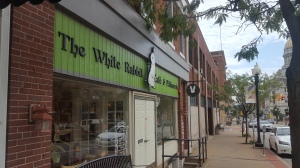 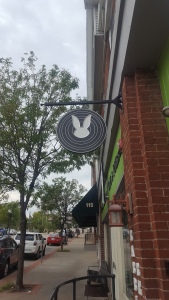