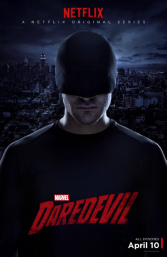 Risk of Getting Addicted: Moderate

“Daredevil” is one of Marvel’s latest releases in its ever-growing repertoire.

The story is based largely on the comic of the same name. It stars Charlie Cox as main character Matt Murdock, a.k.a. Daredevil: a blind lawyer by day and a vigilante superhero with super senses by night, roaming the Hell’s Kitchen section of New York and fighting bad guys.

In season one, Murdock tries to take down Wilson ‘Kingpin’ Fisk—played by Vincent D’Onofrio—a villain whose goal is to change Hell’s Kitchen into his idea of “perfection.”

The first season of the Netflix-original T.V. series was released in early April, and had thirteen episodes, each roughly 45 to 50 minutes long. The show has been renewed for a second season, which will premiere sometime in 2016.

If you’re looking for a show that’s full of action which still incorporates meaningful, emotional moments, Daredevil is perfect for you.

Risk of Getting Addicted: High

Where Rory and Lorelai Gilmore lead, I’m most definitely going to follow. Most recently that’s been to Netflix, where the whole series is available for streaming. I know what you’re probably thinking: “That show went off the air in 2007, why are you recommending it in 2015?”

First of all, Netflix viewers won’t know if it went off the air seven days or seven years ago. Second, you’re going to want to get caught up on the whole series, because there are rumors floating around that four 90-minute mini-movies will be coming to Netflix… sometime. No confirmation on when this might be.

Series creators Amy Sherman-Palladino and her husband Daniel Palladino have full control of the project. The mini-series will show some passage of time, and it will consist of winter, spring, summer, and fall movies.

The original cast is supposedly all coming back, except for Edward Herrmann, who played Richard Gilmore; he passed away last December. And Emily insisted that she go first, so this is completely unfair.
So go forth, watch. Blow off your school work, figure out if you’re #TeamDean, #TeamJess, or #TeamLogan. Figure out why Santa burgers are both sweet and disgusting. Go grab lots and lots of coffee from your local Luke’s Diner and prepare for the revival.