The Women’s Basketball team celebrates their February 24 victory against Franciscan – Courtesy of www.pittgreensburgathletics.com 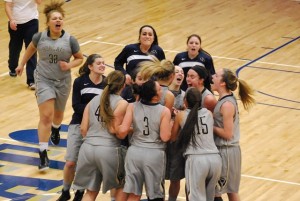 The Women’s Basketball team celebrates their February 24 victory against Franciscan – Courtesy of http://www.pittgreensburgathletics.com

Coming off of a successful regular season with a record of 16-9, the Women’s Basketball team earned a spot in the AMCC conference playoffs for the fourth year in a row.

Winning their last three games of the season, the Bobcats had plenty of confidence heading into their February 24 game against the Franciscan University Barons.

The Bobcats previously went 1-1 in their matchups against the Barons, so they knew fully well that they were capable of beating this team.

The first half of the game was evenly matched, with Pitt-Greensburg up by a score of 32-30. But with Kayla Dames scoring her 1,000th point of her career, it seemed as if nothing could stop these Bobcats.

Their strong second-half performance resulted in the Bobcats’ first playoff win since their 2008-2009 championship season.

If history is to repeat itself, one would expect this to be a competitive game. Tip-off is at 8:00 p.m.

The winner of this game will move on to face the winner of the La Roche/Penn State Altoona game on Saturday, February 28, for the AMCC Championship, as well as the NCAA tournament bid that is granted to the winner.