Brooklyn rapper Jo-Vaughn Scott, also known as Joey Bada$$, has been making serious moves in the music industry since releasing his debut project, mixtape “1999,” in June 2012. After several splashes—notably his hot verse on the album “Long.Live.A$AP,” by A$AP Rocky, on the posse-cut banger “1 Train,” as well as several critically acclaimed mixtapes—Bada$$ is poised once again to shake up the hip-hop game in a major way.

The young rapper—he celebrated his 20th birthday on January 20, the date his album released—has already accomplished a lot in his short career. Bada$$ has received several honors, including being named the Creative Director of the clothing brand Ecko Unlimited, just before turning 18, in January, 2013. Later that year, hip-hop publication “XXL” named him on their “Freshman Class,” a list of up-and-coming talent expected to do big things in the hip-hop game.

Growing up in Bed Stuy, a rough area in northern Brooklyn, Bada$$ took an early interest in the performing arts, focusing on acting, and later rapping, while he went through middle and high school. It was also during school that Bada$$, along with several of his peers, formed the “Progressive Era” collective, called “Pro Era” for short. Bada$$ eventually settled on the moniker “Joey Bada$$” due to the way that he viewed the world, and his general attitude at the time. He felt the 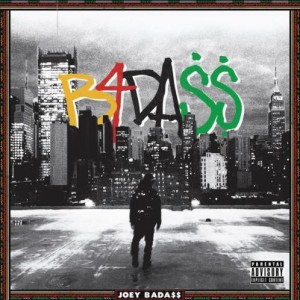 nickname was controversial and would be reflective of his raps. Now, however, Bada$$ said in an interview for “Complex” that “it’s not really about the name. Just listen to the music.” The hype is real. Bada$$ and Pro Era have nowhere to go but up.

The anticipation for “B4.DA.$$” was very high, and it will be interesting to see how the mainstream media will rate the album. The album leaked on January 17.

Upon first listening to the album, I was very impressed with many aspects. The production is on point. Statik Selectah, Kirk Knight, and other well-regarded producers had a hand in the production of the album. Bada$$ has always had an ear for hot beats, and that is only reinforced by the selection of beats on this album. Bada$$’s rhymes are also very poignant. On “Paper Trail$,” Bada$$ raps that “money ain’t a thing if you got it.” Bada$$’s unique flow shines through, and every song on the album incites uncontrollable head nodding to the beat. Additionally, the featured artists on the album are notable. “Pro Era” allies Maverick Sabre and Dyemond Lewis rap on the track “On & On,” and both bonus tracks feature stars Action Bronson and Kiesza.

Lately, Bada$$ and the “Pro Era” have seen a fair amount of media coverage, and not all of it has been good press. The rapper has received some heat after an incident occurring on January 10, in Byron Bay, New South Wales, Australia. According to several sources, Bada$$ allegedly struck a security guard in the face, breaking the man’s nose, after the security guard did not recognize Bada$$ and denied him entrance to a backstage, artist-only area at Falls Festival. Additionally, Bada$$ has been under intense scrutiny from the White House following the release of an image depicting Malia Obama wearing “Pro Era” apparel on the “Pro Era” twitter page. Bada$$ has since tweeted that he meant no disrespect by posting the photo.