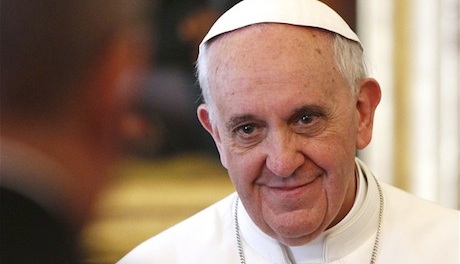 Pope Francis has confirmed a trip to Philadelphia, in 2015, for the World Meeting of Families. This marks the Pope’s first visit to The United States. Since Jorge Mario Bergoglio became Pope Francis, on March 13, 2013, he has been making headlines. Immediate attention was received for his statements on evolution in its relation to faith.

“The Big-Bang [sic], that is placed today at the origin of the world, does not contradict the divine intervention, but exacts it. The evolution in nature is not opposed to the notion of Creation, because evolution presupposes the creation of being tat evolve,” Pope Francis said, in a recent article from The Atlantic.

Despite backlash and misconstrued press coverage, his beliefs are in alignment with the beliefs of the Catholic Church. For years, the Church has not denied the connection between science and faith. In fact, the big bang was first theorized by a Catholic priest– Georges Lemaitre.

Statements on homosexuality also caused media uproar. In a press conference, aboard a papal plane, Pope Francis said, “If someone is gay, and he searched for the Lord and has good will, who am I to judge?”

The message does not condone homosexual marriage, but is a gospel message of mercy and compassion.

“Tell me, when God looks at a gay person, does he endorses the existence of this person with love, or reject and condemn this person? We must always consider the person,” Pope Francis said.

Acknowledgement and acceptance of current issues create more excitement for his Philadelphia visit. It is estimated that over 15,000 people will attend the World Meeting of Families. World Meeting of Families started in 1994, and was organized by the Pontifical Council for the Family. The goal is to strengthen family bonds. Speeches led by church leaders will address the issues of modern families. It is the first time the meeting will be held in the U.S.

To be a part of the events, held at the Pennsylvania Convention Center, you must register online, on the event’s website. Early registration ranges from $95 to $325, depending on the package, and ends on April 30, 2015. Advanced registration will be more expensive and ends on September 15, 2015. On-site registration begins September 16.

If you are not interested in attending the conference, but still want to see the Pope, you can attend his public appearances. While Pope Francis’s exact itinerary has not been released, he will likely make two public appearances on the visit. The appearances will likely be made at the closing ceremony of the Festival of Families, on Saturday, September 26, and a Papal Mass, on Sunday, September 27. Events will be held on the Benjamin Franklin Parkway, in front of the Philadelphia Museum of Art.

Volunteering at the event is also an option. The events will demand thousands of volunteers to “help manage crowds, assist visitors, translate for thousands of international visitors, and more.” Volunteers ca register through the event’s website or email volunteer@WorldMeeting2015.org.

Start to make arrangements now, if you plan to volunteer for or attend the conference or public appearances. An estimated 15,000 people will attend events, but the city has approximately only 11,000 hotel rooms. Organizers hope to find over 10,000 households willing to house visitors for a low cost. It is suggested to charge between $30 and $50 a night (the average cost of a hotel room in the area).