Octopus hickeys: one of the many predictably unpredictable moments of 22 Jump Street. A sequel to 21 Jump Street, the film revels in its cash-grabbing nature. With dialogue that compares the sequel-making process to a downward-spiraling marriage, the film has a sense of honesty. Deputy Chief Hardy (Nick Offerman) prophetically states, “it’s exactly like last time . . . do everything the same and everyone will be happy.” What results is more or less the same movie as its predecessor. The film employs the same delivery, tropes, and devices as 21 Jump Street while remaining self-aware. What differentiates the two films is that the punch lines have taken a considerably darker tone, perhaps to match the uncertainty that late-college years tend to bring. 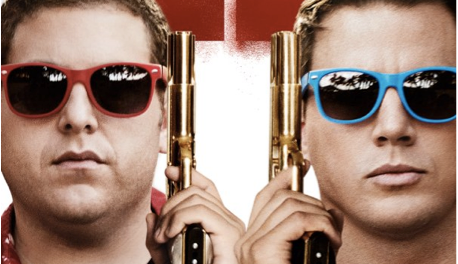 The premise is as follows: Officers Schmidt (JonahHill) and Jenko (Channing Tatum) are assigned to be undercover cops at a school where a new drug has spread like a rash amongst the students. What is different from the first film (aside from having twice the budget) is that instead of going to a high school, they infiltrate a college. What follows is a varied sequence of jokes produced by a generational clash, like 21 Jump Street. However, the franchise realizes that it can’t coast on the same punch lines for two movies, so there aren’t nearly as many late eighties, early nineties references this time around. That said, while the joke topics have changed, the delivery methods are largely intact, which may be why the sequel manages to be enjoyable while explicitly being a commercial product.

Not confined to a single gag, the film keeps laughs fresh by alternating its methods. One second you’ll have Mr. Walters (Rob Riggle) being his manic, ridiculous self. In the very next, you’ll have Eric Molson (Dave Franco) hating life because of his enthusiastic cell mate. By having both optimistic and dark humor within a few breaths of each other, 22 Jump Street distinguishes each joke so as not to be lost in the sea of humor that it has to offer.

For those seeking an evolution to everything that 21 Jump Street did well, you will not find it here. For everyone who wanted an additional two hours of the original film, your prayers have been answered. In any case, it’s enjoyable to say the least. While its self-aware nature can be seen as shameless at times, it’s nearly impossible to blame the sequel as much as we should be blaming ourselves for laughing in return. In its defense, there are no false pretenses.