Every family has their own unique issues and quarrels. Sometimes it’s about who hosts Thanksgiving dinner or missing your nephew’s confirmation.

However, most families don’t have to deal with serial killers, demonic possession, and the occasional rise of an ancient evil entity. These struggles have become commonplace for the Helstrom family. 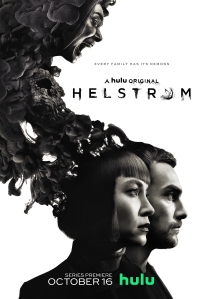 “Helstrom” is a Hulu original series that currently holds a ranking of 6.8/10 on IMDb. The first season of the show was released in full on Oct. 16, 2020.

The series focuses around siblings Daimon and Ana Helstrom (played by Tom Austen and Sydney Lemmon). Due to a chain of horrific childhood events, the two were separated from each other.

These events left Daimon and Ana with supernatural abilities. Daimon gained the ability to remove demons from human hosts and became an exorcist mercenary of sorts.

On the other hand, Ana’s powers take a much darker tone. She can drain the life out of living objects, and has used her skills for her own personal gain.

The siblings must begrudgingly join forces when demons become more prevalent in our world as a formidable foe manifests. As the Helstroms face their enemies, terror lurks in every corner. As the past comes back to haunt the family, Ana begins to struggle with her powers and the soul of their mother, Victoria (Elizabeth Marvel), hangs in the balance.

Will the Helstrom family overcome their struggles and slay the demons, or will tragedy strike again?

“Helstrom” has absolutely beautiful writing and camerawork. The show actually feels terrifying at points and the plot intertwines well with the horror. If you are into shows like Supernatural, then you should give Helstrom a watch.