The international phenomenon, Korean Pop group BTS, made history on Aug. 31. They became the first Asian artist since 1963 to have a number one song on the Billboard Hot 100.

The group’s song that hit number one is titled “Dynamite” and is performed in all English.

The leader of BTS, Kim Namjoon, or RM, said in an interview with USA Today, “We’ve been through all the sadness and desperation but with this song and performance we just hope the world gets more positive.”

Their accomplishment is impactful because it brings new eyes to an entire different culture. Korean pop, also known as “K-pop” has been gaining a lot of attention over the past few years, and a lot of the new eyes are because of BTS’ fanbase, the ARMY.

The ARMY fanbase can be antagonistic to fans of other artists in the music world. This has brought a lot of attention to the group, bringing more people into the ARMY. 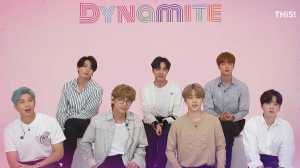 As of Sept. 2, the group’s song is still in the number one spot. A lot of publications believe that they will not be moving from the top anytime soon.

Go check out “Dynamite” by BTS, on all streaming services today.