President Gregerson spoke of Pitt-Greensburg’s current and future financial situation during a town hall meeting in the chapel on Feb. 20. Faculty and staff, as well as representatives from the Student Government Association, attended.

President Gregerson gave the “state of the budget” presentation to update those in attendance of Pitt-Greensburg’s financial relationship with Oakland and suggest ways that faculty and staff can improve student retention rates.

“I don’t like anyone to ever think that decisions are made behind an opaque window,” President Gregerson said.

Tuition dollars from Pitt-Greensburg students are paid to Oakland’s campus, according to President Gregerson. Oakland then gives approximately 65% of that tuition sum back to Pitt-Greensburg.

For each fiscal year, which starts in July and ends the following June, Pitt-Greensburg’s administration must estimate the total number of students who will be enrolled in the Spring and Fall semesters. This estimate becomes the number that Oakland bases the tuition dollars budget on for the fiscal year.

“That’s an interesting way of doing things,” President Gregerson said. “It’s a system set up for a growth environment.” 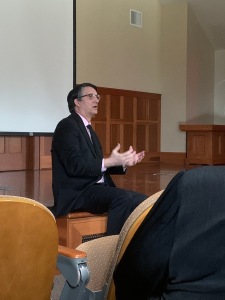 “We made a bad estimate,” President Gregerson said.

The debt for each fiscal year is divided across three years, the first payment due in August 2020.

The discussion of retention was a follow-up to a session that faculty and staff attended over the summer of 2019.

“We have people who care deeply about [student success],” President Gregerson said. “Ask yourself, ‘does this thing enhance student success’? If the answer is no, don’t do it.”

He also believes that student involvement, effort, and participation is essential to improving student success and retention rates.

“It’s a partnership,” he said. “It is always up to the student to take advantage of the opportunities. We’ve got a common goal.”

Pitt-Greensburg’s new enrollment rates are stagnant, and transfer rates are dropping, but a new agreement with Oakland is bringing in $1,000 per transfer student to Pitt-Greensburg, up to $100,000 per year.

He remains optimistic about the future of Pitt-Greensburg, which Georgetown University ranked number 288 out of 4,500 liberal arts colleges across the country in terms of its 40-year return on investment (ROI) for students. Pitt-Greensburg is the highest-ranked Pitt campus, including Oakland, on this list.

“Pick whatever flowery language you want to use,” he said. “We’re a good investment.”