Wrestlers from across the nation came to the event in search for championship gold, as this particular event has a particular twist to. At Reloaded, all championships are on the line and the opponents are selected at random. Opponents can range from the referees and photographers to world-renowned athletes and superstars.

“The American Daredevil” Johnny Patch defended his Super Indy Championship against “The Octopus” Jonathan Gresham. Gresham had returned from a run at Ring of Honor (ROH), and currently held the ROH Tag Team Championship. The match ended in a draw, as both men pushed each other to their physical limits.

Hooven commented on his strategy on how to prepare for his Reloaded match.

“Reloaded is always impossible to prepare for because you literally have no idea who is going to show, so my strategy was to make sure I was in the best shape possible, but when I saw Beastman come across the screen my strategy was to use his momentum against him,” he said. “I have feuded with giants before and know that with patience and smarts there is always an opening to put them down for at least three seconds.”

IWC Women’s Champion Ray Lyn retained her championship in a match against Ring of Honor’s Amy Rose, while IWC Tag Team Champions “The King of the One Night Stand” Jock Samson and “The Heir Apparent” Chris LeRusso (aka The Regulators) lost their titles to the tag team of Bulk Nasty and Zander Gabriel (aka Steak and Eggs). 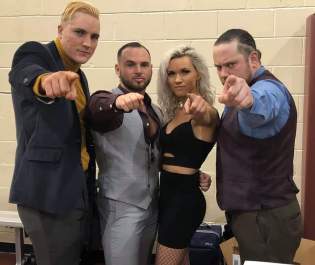 The show also featured a sixteen man over-the-top-rope rumble match called the 16-Bit Challenge. The winner of this match would win the “Reset Button,” which would grant them an opportunity at a title of their choosing at any given time. The match featured popular wrestling names like Brian Pillman Jr., ECW legend Al Snow, and many other talented local wrestlers. “Silver Teeth Satan” Atticus Cogar won the match with the help of his nefarious group: The Culmination.

The main event match featured IWC Heavyweight Champion Jack Pollock defending his title against Jock Samson. The match was brutal, and Samson’s fellow Regulators tried to interfere in the match, but Jack Pollock retained his title. At the end of the show, Brian Pillman Jr. announced that he had signed a contract with IWC and challenged Pollock to a title match at IWC’s newest event, Ignition.

Hooven also spoke on his passion and dedication to pro-wrestling that adds to this point. “Professional wrestling means the world to me,” he said. “It means that hard work does pay off and that you can pursue your dreams. It means being able to leave real world drama and problems at the door and being able to escape as good faces off against evil with friends and family watching.”