Budgets for Pitt-Greensburg’s clubs and organizations saw cuts averaging 43% to funding in the spring semester, leaving them with an average of 57% of the total amount that each club requested from the Student Government Association (SGA).

Each semester, SGA receives a budget from the activities fee all students must pay as part of their Pitt-Greensburg tuition.

SGA distributes these funds between the Student Activities Board (SAB) and the rest of the organizations on campus. 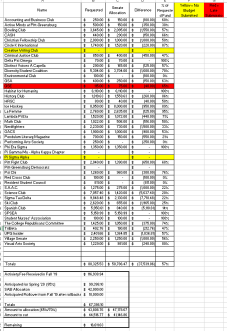 Copy of SGA’s Spring 2020 allocation budget, provided by SGA President John Kerlicker. Typographical errors in the above screenshot were present in the document, and The Insider was not able to edit them.

Each semester, SAB automatically receives roughly 40% of the total funds available, giving them $42,000 for Spring 2020.

Clubs receive funds based on budget requests club leaders submit to SGA for the Budget Extravaganza, where clubs explain the events and activities for which they are requesting funding.

“When they [SGA] do the allocations for the coming semesters, we don’t know how much money is going to be there yet,” Al Thiel, director of the Student Center and student involvement, said.

SGA estimates what their available budget will be for each semester based on Pitt-Greensburg’s student retention and new-student enrollment.

For spring semesters, SGA typically estimates 85% of the total amount from the activities fee they received in the fall semester will be available for allocation.

For Spring 2020, SGA estimated it would receive $99,398.10 to allocate to campus clubs and organizations, according to SGA’s official budget spreadsheets.

“It’s usually going to be higher [than the estimate],” Thiel said. “Part of the problem is that we can’t budget for it to be higher because if we over-budget, there’s no place to get any money from.”

Copy of SGA’s Fall 2019 allocation budget, provided by SGA President John Kerlicker. Typographical errors in the above screenshot were present in the document, and The Insider was not able to edit them.

“They go down every year,” he said. “That’s a whole other set of issues about student retention, student environment … not related really to SGA or to the clubs.”

In Fall 2019, 37 clubs submitted requests to receive SGA funding. That number increased to 41 for this semester’s Budget Extravaganza.

After adding the money left in club accounts in the fall and subtracting SAB’s budget, SGA had $67,398.10. Then, they pick a number between 65% and 75% of that balance, which is what is allocated to clubs.

Copy of SGA’s Spring 2019 allocation budget, provided by SGA President John Kerlicker. Typographical errors in the above screenshot were present in the document, and The Insider was not able to edit them.

The remaining 25% to 35% ($16,611.63 for Spring 2020) comprises the short-term allocation budget, which allows clubs to submit requests for SGA to fund events which weren’t included in their long term budget throughout the semester.

“It’s not a fun thing at all,” Thiel said of the budget cuts. “The goal is to try to do it in the fairest way possible, to do it where it’s going to have the least impact on overall student population.”

SGA bases primary budget cut decisions on whether or not each club met their requirements and duties for the semester, such as attending House meetings, ensuring members attend campus events such as the Leadership Conference, submitting their budget before a set deadline, and presenting it  at the Budget Extravaganza.

“We go through each budget individually,” he said. “We have a spreadsheet … We see if they haven’t done things we have asked them to do as a part of receiving money that they asked for.”

“We’re not going to cut them 100 percent just for that,” he said, “but they might lose some money for stuff like that.”

SGA Senators who are also involved in a club typically do not participate in determining that club’s financial awards.

“Whenever it’s our own club, the senators abstain from voting on that or from discussing it,” Falbo said.

The Budget Extravaganza takes place over one weekend each semester, and clubs are assigned a time slot on either Saturday or Sunday to present  their budget and explain the events for which they are requesting SGA funds.

Copy of SGA’s Fall 2018 allocation budget, provided by SGA President John Kerlicker. Typographical errors in the above screenshot were present in the document, and The Insider was not able to edit them.

“Leading up to it, we didn’t have as much information as we would have liked,” she said. “We really had to emphasize that we were going to a conference and that we really needed as much money as we could get in our budget. But after we got our SGA budget back, we were kind of freaking out because they had only given us enough to cover hotels, and there were so many more expenses.”

Peddicord also spoke of SGA’s requirements for each club.

“I’ve gone to a lot of the seminars and things,” she said, “but the entire process and how it all works is still a little confusing.”

Kerlicker encourages students to talk to him about suggestions they have for events and activities happening on campus.

“I try to be as open as I can,” he said. “I try to make sure that people know who I am and are comfortable talking to me. … It’s not a one-man show in any way. The only way to make the campus better is to hear things from people.”