Emily Buckel and Nicholas Morozowich debate the merits of meat on Thanksgiving.

Emily: Stop Forcing Your Love of Meat on Me 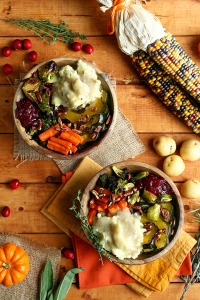 Dietary restrictions suck, and that includes the self-imposed ones. See, if you’re like me that means meat physically makes you ill. Ill enough to warrant a hospital trip because the pain is a definite 11 on a scale of 1 to 10. You’re so sick when you eat meat, that you cannot physically move and occasionally pass out for up to 16 hours. My logic behind not going to the hospital was that I figured out pretty quickly that it was meat making me sick.

I have a few problems with thanksgiving, but one of the biggest is the huge emphasis on meat. I get it, people like their turkey, but why do they have to try and force their preference on the non-meat eaters? Sure, make remarks like “are you sure you don’t want some turkey?” and my favorite “I don’t know about you, but I would die if I couldn’t eat meat.” Dietary restrictions—prescribed or self-imposed—are brought on to make the person healthier. You wouldn’t tell a diabetic to eat marshmallows because they’re delicious, would you?

Let’s forget about diet reasons for not eating a turkey at your family dinner. Some people want to be environmentally friendly or stand for animal rights. If you’ve taken a science class on campus, chances are you’ve learned about carbon footprints and the large chunk of carbon created through the meat industry. Animals aren’t very efficient sources of food.

Don’t give me that crap about protein, the recommended intake of protein is about 50 grams between men and women. That sounds like a sizeable amount, yeah? Psych! A single serving of turkey (3 oz) has 26 grams of protein (this is about the size of a deck of cards, according to trusty google). Two servings of turkey will give you your daily intake of protein in one single thanksgiving dinner.

So, what’s wrong when you inevitably eat more protein than necessary? That extra protein is broken down and turned into fat, unless you’re consistently working it off and building muscle.

You’re inevitably going to have a few servings of turkey, ham, and a ton of other food that already has protein in it, why not cut back on the meat?

Whatever you decide, try not to force your love of meat on the people who don’t eat it. Thanksgiving is the prime time for family drama and the last thing you need to do is trigger your vegetarian cousin. Have some meat alternatives and be considerate.

Nicholas: The Totally Practical Reasons You Should Have a Non-Vegan Thanksgiving 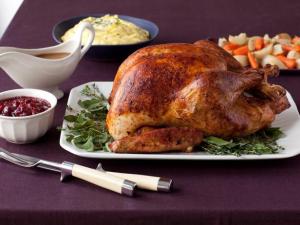 I’ve heard talk that one should eat meat substitutes, such as tofu, instead of turkey for Thanksgiving. People say, “Meat is murder!” Well, just so you know, these animals have all willingly and nobly sacrificed themselves so we could feast on their corpses. Besides, those turkeys deserve it: they’re on death row after all. Why else would the President pardon them every Thanksgiving? These turkeys have done some seriously messed up stuff.

So serious that I refuse to mention what exactly they did.

As for all this talk that eating three pounds of turkey in one sitting is unhealthy, I just won’t stand for it. I literally can’t stand; I’ve eaten too much turkey. So what if consuming large amounts of meat in one sitting can increase the risks of obesity, heart disease, high blood pressure, high cholesterol, cancer, and infertility? If God had intended us to eat healthy portions, he wouldn’t have invented the all-you-can-eat buffet.

By now, you’ve probably realized that I’ve had a hard time finding reasons that we should eat turkey or any other kind of meat for Thanksgiving, or in general. Sure, meat tastes good, but that’s the problem: We like meat so much we eat too much of it. I’m not here to make you feel guilty about eating meat, I just think that we should tone it down some. There are of course, benefits to eating meat, such as turkey.

For example, protein in meat (and other foods such as nuts or legumes) helps to maintain muscle mass and keep insulin levels at a stable level. And we are (usually) happier after we eat meat. Again, I’m not here to tell you to never eat meat again (I myself am probably too weak to ever go through with an all vegan diet), but you should consider toning it down. Above all, have a Happy Thanksgiving.