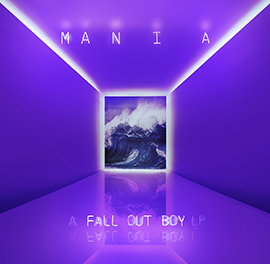 This comes just over three years since their last album “American Beauty / American Psycho” was released.

The hype that has built up over the release of their seventh studio album has come from the few singles they’ve released over the last year, the first being “Young and Menace,” which was released back in April.

When they started dropping singles and announced a new album, all of us ex-emo kids’ hearts were full.

Upon listening to the album, you get that classic FOB sound,but with a little more influence from EDM, which has become wildly popular in the last couple of years.

Any die-hard fan of Fall Out Boy will love the album, there’s no doubt.

The album itself has received mixed reviews by critics, but whether you enjoy the album or not, there is a song for everyone. On the track “Sunshine Riptide” Nigerian singer-songwriter Burna Boy features, and it’s the only feature on the entire album.

Having minimal features isn’t uncommon for the band, an exception being their album “Save Rock and Roll,” where they had several features on tracks, including musical legend Elton John, and rap sensation Big Sean.

“MANIA” instantly charted on the Billboard 200 upon release.

Patrick Stump’s soulful vocals that caused the band to explode in popularity are most apparent on one of the tamer tracks “Heaven’s Gate,” a love song that gives off a R&B vibe and a similar gospel like sound that the track “Church” demonstrates.

I wouldn’t say it’s their best album by any means, but it was good. It’s obvious that they like the music they are putting out, which is the most important thing.

After giving the album several listens, I would rate it a 3.75/5.

Fall Out Boy will be coming to Pittsburgh on Sept. 5, 2019 at PPG Paints Arena for their MANIA World Tour.