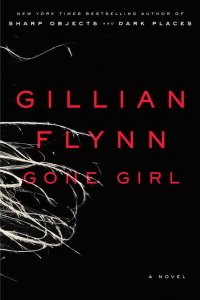 “Gone Girl,” written by Gillian Flynn, is the story of married couple Nick and Amy Dunne, who live in North Carthage, Missouri.

It is a story you will never forget.

On his fifth wedding anniversary, Nick Dunne visits his sister, Margot (“Go”) at their bar, creatively named The Bar. The two of them talk about Amy, laughing a bit, as he ponders what is in store for him this time. In the past, Amy planned a scavenger hunt for Nick, and to “win”, he had to visit all the spots they shared together.

He could only hope that he got everything right.

But when Nick returns home, he realizes that his wife is, indeed, gone. Blood scattered across the floor, the house in disarray, Amy stages the house to look like a crime-scene. Suddenly fingers point at Nick, and he finds himself pleading for his innocence.

As the novel unfolds, Nick asks himself: Why would Amy do this to me? How could she?

The book dives into the perspectives of both Nick and Amy, both past and present. This book highlights the disintegration of love and marriage and demonstrates how far someone will go.

All in all, I give this book a four out of five. It kept me on the edge for the most part, but there were scenes describing the past that I felt were excess. However, these moments did help me understand the characters better and further developed the plot. Five hundred pages, though? Seems a bit much. Flynn could have wrapped this up in 350 or less.

To summarize, Amy is hella crazy.

The craziest chick I’ve ever met, and she’s not even real.