Lane Bryant’s #ImNoAngel campaign comes in response to Victoria’s Secret’s “The Perfect Body” campaign and is meant to promote body acceptance and confidence. – Courtesy of LaneBryant.com

What do you think of when you hear the word angel?

In today’s society, you probably think of a tall, thin girl walking down a catwalk sporting a sexy bra. These “angels” represent the Victoria Secret brand and, in doing so, have set the “beauty standard” for years in the fashion industry.

Lane Bryant’s new campaign features a 30-second, black-and-white video of six curvy women in bras and panties from Lane Bryant’s Cacique collection. In the video, the women tell the viewers that they are “all kinds of sexy,” which, let’s face it, they are.

The hashtag #ImNoAngel went viral as Lane Bryant called out to women of all shapes and sizes to take a selfie in the mirror and write why they are sexy.

Ashley Graham, one of Lane Bryant’s #ImNoAngel models, was among the first to post a picture using the hashtag. On the mirror, she wrote: “Beauty is beyond size.”

Though selfies are often ridiculed, in this case, the selfie is a powerful thing. Taking a picture and feeling sexy is empowering, even. These women are taking pictures of themselves and proudly posting them. They are saying they are sexy and beautiful—it doesn’t matter what anyone else thinks.

In addition to a presence on their website and social media, Lane Bryant has billboards in New York City and even has lingerie-clad women pasted on buses and subway cars.

On Instagram, a few women commented on the photos complaining about the publicly half-dressed women.

Should we be ashamed of the naked body?

We live in a world where people don’t always cover up. Victoria Secret’s Angels wear the same amount of clothing, yet people don’t seem to complain. Abercrombie and Fitch and Hollister are known for their half-naked marketing, something I always found funny since they are selling clothes.

Plus-size women shouldn’t have to hide their bodies with baggy clothes anymore, and they never should have. It’s about time something is done about it, and that’s exactly what Lane Bryant is doing.

A statement on the Lane Bryant website, under the video, summarizes the campaign in two sentences: “The women who wear Cacique know that sexy comes in many shapes and sizes. They’re no angels—and they own it.”

The beautiful thing about this statement is the simple notion that sexy does come in different shapes and sizes. The statement alone includes every one—thin, curvy, tall, short, woman, or man. Sexy is not something that is or should be limited to any certain size or shape or even gender. 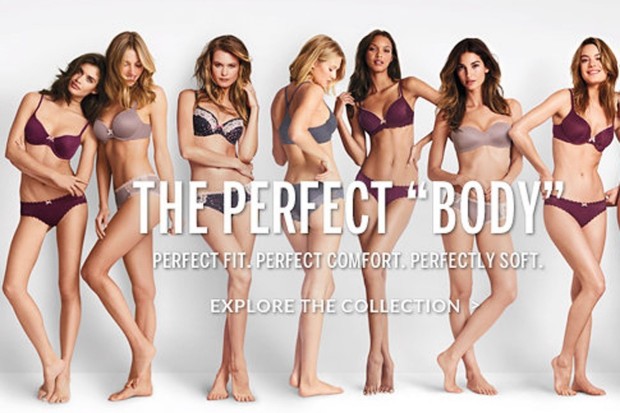 The campaign, meant to promote the bra, instead sent the message that there is one type of body to be desired.

Though beautiful, the Victoria Secret Angels don’t represent the average woman. Instead, the angels hold an impossible standard for women and young girls.

Plus, let’s face it, if we all looked the same, the world would be a pretty boring place.

Young girls also shouldn’t be constantly exposed to the idea that there is a perfect body, and, in fact, neither should young boys. Kids and teenagers shouldn’t feel expected to look a certain way. Being young is about having those terrible haircuts, bad acne, and baby fat. How can they possibly be told to look a certain way when their bodies aren’t even sure what the hell they are doing?

As a plus-size girl myself, I thinkLane Bryant has launched more than just a campaign. It’s a body-positive movement.

For the last few years, hashtags like #effyourbeautystandards and #losehatenotweight have been used on social media sights, but a campaign of this size is new.

Is it just my family that constantly reminds me to watch my weight? People don't realize that the little things hurt too #losehatenotweight

#ImNoAngel shows us that sexy isn’t defined by a bra size or a pant size. Sexy doesn’t have boundaries. Sexy is how you feel about yourself, and we should all feel sexy about ourselves. This campaign lets us know that, and I think it’s something we didn’t know we needed. We didn’t know that it was okay to feel sexy even though the beauty standard says only one body is perfect. All bodies are perfect and beautiful because they all exist.

I think it’s apparent that this idea of the perfect body has had an effect on women’s self-esteem. Dove’s new campaign #ChooseBeautiful represents the damage well.

Dove also recently had women take a survey to see what they vote themselves—beautiful or average. An overwhelming 96 percent of women voted themselves Average.

A spokesperson for Dove said, “Women make thousands of choices each day—related to their careers, their families, and, let’s not forget, themselves. Feeling beautiful is one of those choices that women should feel empowered to make for themselves, every day.”

Be sexy. Be beautiful.

Just don’t shame others for their appearances. We need to stop creating impossible standards, one body part at the time. Nobody is going to have the perfect waistline, eyebrows, thigh gap, and sculpted ass.

We need to stop saying that tall and thin is the perfect body, but at the same time, we can’t say that it isn’t. We can’t shame women who have those bodies. That means that hashtags like #realwomenhavecurves aren’t acceptable. If a woman doesn’t have curves, it doesn’t mean she is less of a woman.

Nobody is less of a woman.

Being sexy and beautiful is about confidence. It’s about self-esteem. It’s not something that can be measured by a size of clothing or how symmetrical your features are. It doesn’t matter if you are a size 0 or a size 22. It doesn’t matter.

Do you hear me?

Beautiful is a feeling. Sexy comes from believing in yourself. It’s a state of mind.

So try to, because you are sexy. You are beautiful.

Michelle Boring is a writer and web editor for The Insider