Filmmaker Nate LaSor graduated from the University if Pittsburgh at Greensburg in 2014. Like all undergraduates, LaSor was unsure of the crazy adventure ahead of him–until he dropped everything, drove to California, and met a contact to help him get his start in Hollywood.

“I thought I was interested in going into the military at one point,” LaSor said. “I wanted to be a golfer and even wanted to work for NASA. I actually started to get a little bit depressed toward graduation because I didn’t have any major plans for my future. Then literally, about a month after graduation, I picked up and moved to Los Angeles.” 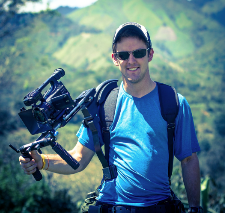 Moving across the country was a big, scary change for him, but he decided to take a risk and challenge himself.

“It was a little bit of baptism by fire,” he said.

Labor bought his first video camera to do smaller jobs for family members or conference events, and then he began to make his own short films at school.

“I made close relationships with staff members at Pitt-Greensburg, and I couldn’t seem to stop talking to them about filming.”

While attending Pitt-Greensburg, LaSor worked in Pittsburgh for a commercial company. He got a call on day from a production designer in Hollywood who said, “quit your job, and come out to L.A. to see what you think.” LaSor took the opportunity.

“I was working on the set of the film ‘Dark Skies,’ and for the first time I got to see what it was like to work on the set of a movie and really liked it,” LaSor said. “I was actually a background extra for the movie ‘I am Number 4.'”

The whole experience was eye-opening. He began making contacts with world-famous companies such as Universal Studios and Warner Brothers.

When the summer was over, LaSor was certain his career path was to become a filmmaker. His inspiration from his experience continued into the semester and–with the help of a few Pitt-Greensburg staff members–led him to something even bigger.

“I was considering not going back to college, but my colleagues at the time told me to stay in school and become as well-rounded with education as possible, and come back out to L.A., so that’s exactly what I did.”

LaSor focused on media within the communication major and worked closely with Dr. John Prellwitz, a Pitt-Greensburg Associate Professor of Communications, to create a film group on campus.

“It seemed like great timing since the campus had nothing like that. So, eventually, ‘Pitt-Greensburg Media’ was created.”

“I have an uncle in Pittsburgh who is a doctor and director of the UPMC Residency Program and wanted to create a documentary for Shoulder to Shoulder Pittsburgh and all the help they provided to Honduras. I knew that doing this would legitimize our group on campus.”

LaSor and his crew flew to Honduras to follow doctors around, night and day, for a few weeks.

“Honduras is one of the poorest countries in the western hemisphere, and we were so lucky to have the opportunity to capture this.

“The film impacted the hearts of Honduras, and we achieved so much, looking back from when we were just a few cameras shooting five-minute clips to creating full-length productions,” LaSor said.

Although all of his work is impressive, LaSor’s experience with official productions drove him to the top, where he assisted with the production of a Taylor-Swift music video.

“I got a random phone call out of the blue one day,” LaSor said. The cryptical caller told him to show up at 7 a.m. at a certain address, leave his phone in the car, and not ask any questions.

LaSor arrived on the set, got his radio, and asked the guys in his department what the shoot was about. No one would tell him.

Next, they gave LaSor an ID badge, which are given out only for bigger projects.

“That’s so they know you aren’t just some punk who snuck in. I knew it was huge,” LaSor said.

LaSor began prepping the stage with the light crew, and then he heard the bodyguard announce, “Taylor Swift is coming on set.”

“I was like, ‘holy smokes.’ She walked right past me on the stage and I was starstruck,” LaSor said.

“It was such a great gig, and I was so fortunate to have that opportunity.”

Labor is now a permanent resident of L.A. and plans to stay there. He is working for a company that specializes in wireless, high-fidelity speakers. He’s been doing a lot of screenplay writing and hopes to become a film director in the future. Over the next year, LaSor’s plan is to write a series of short films that he hopes to put on Netflix.

“If you want something bad enough and you’re willing to put in the time and sleepless nights, and you’ve got that passion engraved into your brain, then things have a way of working out.”