Photographs from the trip, courtesy of Courtney DiBridge:

University of Pittsburgh at Greensburg Woman’s Basketball team, better known as the “Bob Kitties,” traveled to Bermuda this past summer.

The experience was a major accomplishment, as it marked the first foreign trip for the Pitt-Greensburg athletic program. An accomplishment that did not come without years of hard work. The team spent over three years fundraising to pay for the trip.

Their efforts also surfaced opportunities for athletes on our campus. Athletes at Pitt-Greensburg might not have thought foreign travel was ever possible.

Bob Kitties also had time to explore and enjoy Bermuda. Team members described cliffs over clear waters, pink-sand beaches, and lessons in the sport of cricket. 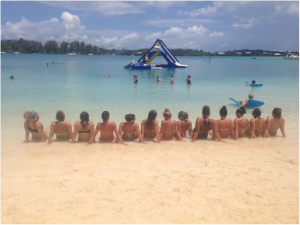 Photographs from the trip, courtesy of Courtney DiBridge:

“The Bermuda trip was life-changing. I experienced paradise with my team and we now have an indescribable bond. The team is a family now. We will have the memories from Bermuda for the rest of our lives. It was all such a blessing,” Megan Hans said.